Our common orientation should be a solide system of Grand Conquest rules. That's the necessary basis so that participants from all over the world are able to play Grand Conquest altogether.

Mr. Donald Benge was a creative person. He used to refine his game. That's the reason why different versions of his game description exist and regrettably different editions of the board for two players, too.

So it's important to create the common standard:

1. The 2-player-board.
A vinyl board of Grand Conquest which is sold in the USA deviates from the common standard relating to the fields where only camels (+ soldier) and knights can be moved.
If you have bought this board you have to use only the pathes of this terrain which are marked in red on the following Grand Conquest plan (see below!).

On the standard board space 185 and space 285 aren't outfitted with 3 steps to this terrain.

- On the standard board there isn't a direct connection from field B11 to field B12. The stopover between field B11 and field B12 is field B10.

- On the standard board there isn't a direct connection from field B23 to field B24. The stopover between field B23 and field B24 is field B22.

Edit:There are two additional deviations of the vinyl board from the standard:

- On the standard board there is not(!) a direct connection between the sea spaces 715 and 735.

- On the standard board there is(!) a direct connection between the sea spaces 503 and 505.

Read the latest version of the rules at first! Then pay attention to the following remarks!

a) Grand Conquest rules for 4 players:

- The following sentence of the game description about catapult shots is incomplete: "On the game board, some spaces are marked" You should continue in this way: "... with a small yellow slot that point to non-connecting spaces that can also be hit by catapults."

- In two cases the game description from the year 2006 is more precise. So we have to consider that on the 4-player board, too.

A soldier (riding a camel) "may dismount from a field to an adjoining space with three steps or" (according to the rules of 2006) "mount a camel in a field adjoining that space."

"A catapult may commandeer an unoccupied enemy galleon at port, but" (according to the rules of 2006) "it will not be regenerated."

b) Grand Conquest rules for 2 players:

The following rule is missing in the latest version of the Grand Conquest rules for 2 players from the year 2006:
"A catapult shot at a siege engine will knock off all of the soldiers on it, but it will do no damage to the siege engine itself. They are the only pieces catapults cannot destroy." Nevertheless you should mind that on the 2-player board.

c) Where are the "mountains"?

Since I can't really perceive mountains on the boards it's obvious to skip these text passages of the rules:
- (4-player-rules) "A catapult may also shoot at any piece in an adjacent field that is not completely obstructed by mountains. (the underlined text is obsolete.)
- (2-player-rules) "Catapults cannot fire over mountains."

d) Clarification of the rule "direct transfer of a soldier" (2- and 4-player-rules):

In general a direct transfer of a soldier from one means of transport to another isn't allowed. But if a vessel is involved in
this direct transfer (for example: from an elephant to a galleon) this move of the soldier is allowed (see the Puzzle Book, solution of the problem E).

e) Recommendation of a rule change

Since the general reproduction of captured pieces destroys achieved tactical advantages (see this topic) it's recommendable to agree on the rule change D1.

f) Grand Conquest rules for 2 and 4 players in German

You can download the German rules here. I strongly recommend to use this translation and not the one you find in the official German box of Grand Conquest!

Marked pathes on the Grand Conquest Board for 2 players
You could click on the image and then choose the option "original" to enlarge the image. 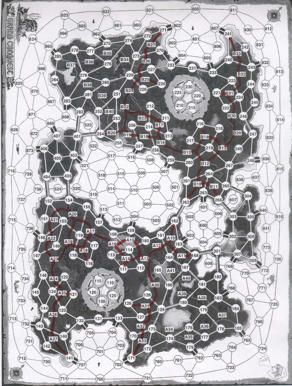 Special Grand Conquest characters you could deeply need on www.conquest-forum.de :